I took three years of Latin in middle school, two years of Spanish in high school, and studied German a bit for a family vacation there in 2007. I know a few words each in half a dozen other languages, but I can't really say I speak anything but American English.

I can speak posh English???

Haha... But I can talk like a pommie (without the accent), or I can talk complete bogan, aye mate

According to one of my old college profs, the official standard for "accentless" english is the midwestern US accent as heard on US major network TV news broadcasts from guys like Walter Cronkite, Dan Rather, Tom Brokow, and Peter Jennings. This was back when we had such badass news anchors that this sort of standard was possible, not the namby-pamby lightweights we got now (aside from Brian Williams, who is just barely worthy to carry Brokow's golf clubs).

Being from Chicago, I'm probably a lot closer to accentless English than any Aussie, but the Aussie accent is probably a lot more likely to get a guy laid.

Believe it or not, the strong bogan accent isn't actually too common. we've got hints of it, but nothing compared to what you'd be lead to believe.

Midwestern US english being the least accentish one makes sense to me.


And why does everyone love french?! I freaking hate it!

I prefer Russian, but the women seem to fall for the French accent...

Although the ladies from, I think it's Norway, are pretty damn amazing... I think it was the norweigian independence day they were celebrating at my uni (don't know why), and boy, I had to be careful not to stare... About as good as an Aussie chick in a bikini, and they were still fully clothed
_________________
Guess what, we now have a signature

That's scandinavian chicks for ya, why do you think Sweden is known for them

I totally agree on Russian, it's awesome

Australia and Scandinavia are two places that have both awesome gals and cool guys. Irish, Russian, French, Italian, and even German women tend to be awesome. The guys from those cultures tend to be awful. Drunk jerks, for the most part. Aussies still tend to be drunk, but a lot less jerky, the fun sort of drunks. Back in Viking days, the Scandinavian men were pretty awful, but in recent decades they've settled down and become quite well-behaved, for the most part.

Scandinavian people can be both terrible and drunk. They're also allergic to strangers, but once you get to know them they're usually pretty nice.

My new laptop keyboard having black flat keys make it hard for me to sometimes spell words right in the dark. Grr autocorrect rocks on ios. Other than that I can spell just fine.

And to do with terrible grammar mistakes...

One of the largest cereal brands here (not sure if you have it, so I'll explain as if you have no clue what I'm talking about), Kellogg's, has a cereal aimed mostly at children (i still love it, it's amazing), called coco pops, which is essentially puffed rice covered in coco (did I mention it's amazing?). Theiir entire advertising campaign is around "coco the monkey" and his friends, which do awesome stuff. Anyway, the advertising for it has stopped, and as a result, they have had the same design on the back of the box for years, with a massive grammar mistake on it...

It says "What action packed adventure! How many cool things is coco doing?" Seriously.. the fact that it has been on the box for many years is just horrifying
_________________
Guess what, we now have a signature

Haha, bad job Kellogg's. They're big globally though, we even have coco pops here and I remember how the monkey looks like even though I haven't had any for ages.

There we go, the rest of the world gets to enjoy the awesomeness too

Brendanan wrote:Since you're on the forums, can you join me on the server digging?

Not yet, but I don't think you meant me.

Is that the same as Cocoa Puffs here in the US? That had a cuckoo saying "I'm Cuckoo for Cocoa Puffs!" in their ads for ages. (Quick check of Wikipedia later...) Nope, that's a General Mills offering, not Kellogg's. The stuff you mean is Cocoa Krispies here, marketed with the same Snap, Crackle, and Pop elves as the plainer Rice Krispies. Never was a fan of chocolate-coated or over-sugared kiddie cereals, my cereal tastes run to the bland and boring. Kix, Corn Flakes, Chex, Crispix, Special K, Cinnamon Life. Cereals are already practically pure carbohydrates, adding sugar on top is gilding the lilly.

it might be nestle that works with general mills...

Yes, it is exactly the same as the rice things with the snap crackle and pop. Here they're called rice bubbles...

We have special K and corn flakes, and I have a feeling the rest are just different names for the same things. I generally just stick with the cheapie brand of rice bubbles... unless I can get nutri-grain or crunchy nut cornflakes
_________________
Guess what, we now have a signature

Just found this photo, and since this is "random discussions"... it belongs here 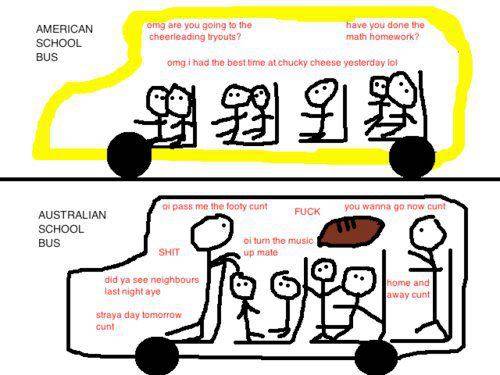 Bullcrap. American school busses are just as loud, profanity-filled, and vulgar as Aussie ones. I rode the bus 8 miles each way to and from school every day for three years, and it was an education in and of itself.

I think the focus was supposed to be on the status of the aussie one. I can agree that the american one seemed a bit tame though, I mean who hasn't seen that recent clip of the kids bullying that poor woman in a bus in the us? It was disgusting.

A funny note is that swedish buses are the complete opposite. People sit quiet and try to stay away from eachother.

Public transport is very much like that, but school busses etc are pretty rowdy. The quantities of the profanities are pretty shameful though... And you'll never go to a school where there isn't at least one large group of people always throwing around the footy (our football is so much tougher than American football)
_________________
Guess what, we now have a signature

We actually get Australian Rules Football matches on TV here in Chicago. Like Rugby, it has a lot more continuous motion than the stop-and-start nature of American Football. Which favors the wiry and lean sort of players you get in Soccer. American Football is not continuous motion, it's sudden sharp exertion punctuated by periods of inaction and rest. Which favors brute strength over stamina. So our football players are much bigger, stronger, and harder hitting when they slam someone to the ground. Which is why American Football players have to go onto the field armored like tanks and padded like a debutante's bra -- you couldn't run back and forth across a field in that getup without collapsing from exhaustion, but they don't have to. Put the toughest Rugby player on the line of scrimmage between the Bears and the Packers and they'd snap him in half like a twig.

Which, ironically, is why Soccer will never catch on in America. Soccer is all about stamina, it's the ability to keep running back and forth up and down that field for 45 minutes at a solid stretch with little or no opportunity to catch your breath. An average American Football linebacker would collapse and have a heart attack if he tried to do that. But that sort of continuous action doesn't leave any room for commercial breaks in a TV broadcast. The big US sports have frequent pauses in the action, perfect for commercial breaks: between innings in baseball, the frequent timeouts and quarter breaks of basketball, the possession changes of football. Without commercial breaks, the biggest source of money is gone. Without a big source of money, there's no impetus to have a big league with world-class stars and no money to pay them.