All right. We are tasked with prettying up the entry tunnel. Apparently the pillars in place were not popular. I dunno, I kinda liked them. They were not "oh my god that is so perfect", but they were perfectly acceptable, as far as I can tell, but this is not my usual area of expertise. With that caveat in mind, here's my offerings as far as potential replacement concepts.

1.) Wallpaper the tunnel with alternating lava and water columns separated by double-slab columns.

This has the advantage of taking care of lighting and decoration all at once. No need for torches, and if anyone is stupid enough to brush against the lava (I will probably be the first, my clumsiness is legendary), there's a water column right next door they can use to put out the fire.

2.) Alternating copies of the existing columns (albeit with lapis replaced with blue wool) and flaming-netherrack sconces.

Note two slightly different versions of the sconces to be considered. Netherrack would be elevated enough we're unlikely to walk over it or jump into it and set ourselves on fire, so is slightly safer than floor-to-ceiling lava. We'd still probably need a few torches, but not too many.

Examples are on display near the main entrance. I'll see what I can do about further alternatives to consider.

you're doing great so far Spectrumwars

good to have you around

Personally, I think the first option is a bit too much. I do however like the idea of small pillars you have. I don't know what happened to the very first pillars we had but those were my favorite.
Also I was thinking we could have something interesting at every turn and intersection like the lava fountain.

I definitely agree that we should have something interesting or unusual at the turns. A lava or water fountain, a snow golem "guard post", an elaborate doorway to a room of some kind...there are lots of good possibilities.

Putting the Netherrack in sunken pits along the wall greatly reduces the chance of accidents. The logs are supposed to be giant version of the wooden support beams seen in Abandoned Mineshafts. So far they don't seem to catch on fire from the netherrack as I sort of worried about that.

Despite the fact it is wood, I quite like that... Would it suit better there, or in the path to the throne room???

I've made a design for the tunnel to store room

floor has been changed to stone bricks

Perhaps change up the slab pattern a bit? While I like that look, it always gives me the impression of some kinda modern lab.

hmmm.... i get ya... what would you suggest? more variation?

Lots of stone brick would be nice. Maybe keep some slabs but mix them with bricks or smoothstone, or whatever you can think of.

I love it, and req thinks it works too

What about having the netherack below floor level and a cage around the fire?

All of these really look good. I especially like the netherrack in the wall with iron bars. If I find areas that are in need of some love and have acceptable qty materials I will start re-using some of these designs.

All right, I finally have a design I'm really happy with. It's enough light to keep mobs from spawning, without looking overly bright. It's a smooth and clean design without looking too modern or clinical. It uses resources we have access to in large amounts, yet is still impressive. I've done one short leg of the tunnel in this style, the first leg on the left side as you come in through the main entrance. I'm gonna have to go back to storage for more materials to expand it further. Although I've managed to find a way to light those lava panels in the ceiling with only two buckets of lava per panel, if anyone wants to run a dozen lava buckets up to the entrance, that would be most appreciated.

View from the top of the leg, looking down.

View of the base of one of the pillars, showing twin fireplace detail.

View from the bottom of the leg, looking up.

That's really good! I especially like your design, SW.

I vote keep it... I think at long last we have a design for our tunnel

Okay, Bren and I worked for a while, and we extended it to cover the main entrance tunnel and the first leg and a half of the left side tunnel. I also decorated the back wall with a netherbrick-and-iron-blocks version of the same sigil that is featured so prominently in the Portal Room. It bears a striking resemblance to my own personal sigil, so what say we make it the sigil of our fair city? Here are a couple of pics of the entryway.

I was thinking of something like this for the lower tunnels. 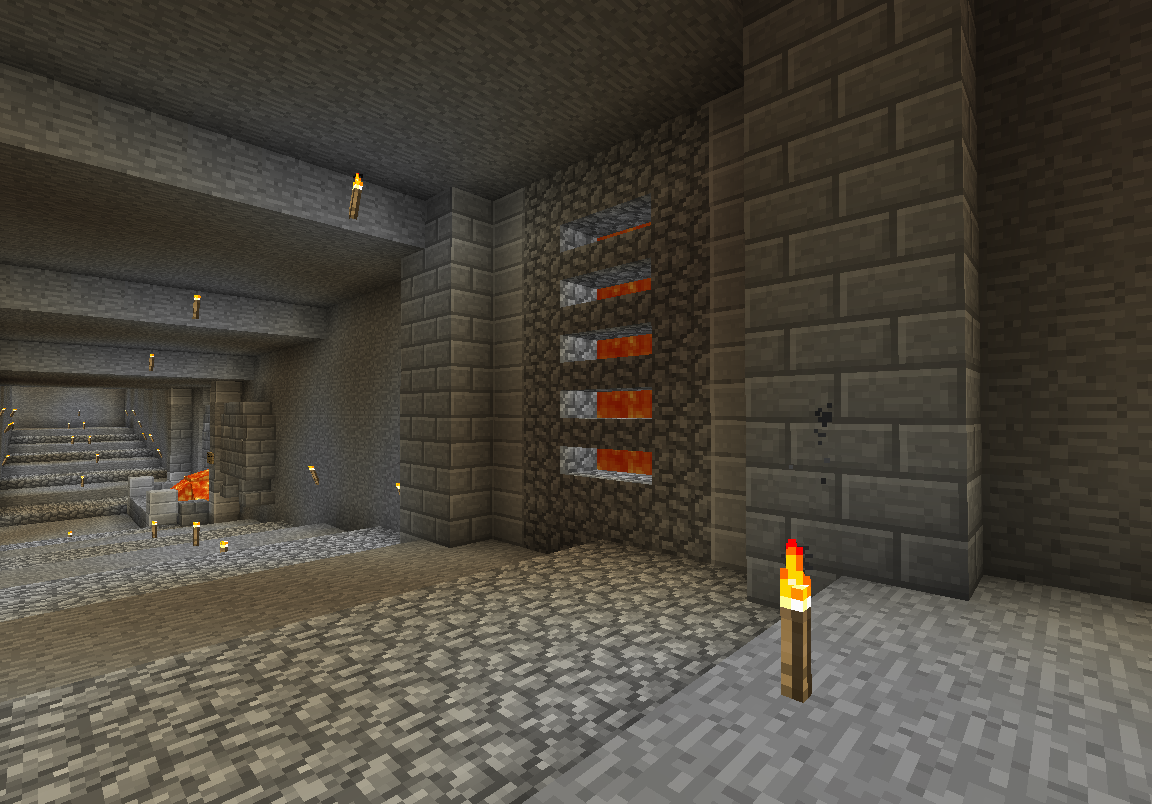 You should note that this design was intended for parts of the tunnel near the lava fountain.
I like this look because its a little darker but still looks secure and strong. We can still have the floor bright but I like the shadow that the partially blocked lava gives.

I was thinking that design over my original one... I was actually going to see how it looked tomorrow

This is my favourite so far, I think the bricks work a lot better then the slabs

View from the top of the leg, looking down.


Sorry I ment this one

you sir are full of win!

I know this is long since anyone last posted on this topic, but I wanted to put forward my opinions on these designs, man they look great! I prefer especially the baskets and such, because they feel more dwarfy. Because I reckon the city shouldn't be perfectly lit up everywhere, quite a dim light makes it look more epic